After reading rave reviews about the Panasonic 7-14 f/4.0 Micro four-thirds, I ordered it a week before my trip to Turkey last month. When it arrived, I fell it love with it immediately if for nothing else than it’s size. It was TINY compared to ultra-wide angle SLR lenses. If it could live up to the superb image quality people were raving about, this would be one of my go-to lenses.

Unfortunately, after traveling to Turkey for 3 weeks with it, I ended up selling it upon my return.  It turns out that when it’s paired with the Olympus OM-D E-M5, you get some pretty viscous purple flare and spottin in scenes you least expect it.

Sure, lens flare is nothing new when your shooting offset from a strong light source, but what I saw was atypical from any other lens I tried in in the past, even UWA lenses on my D700 and D7000.  Here is an example image I shot in Turkey:

Here is the center magnified where you can see the purple spots:

Throughout my trip, I kept getting these purple spots in shots where I least expected it.  I could post over 50 photos that are ruined due to the flare.

When I got back home, I went on the hunt to do some research to determine whether my expectations were too high, or there was indeed something wrong with the lens or camera+lens combo.  After doing some digging, I found quite a few mentions of the same problem, and ultimately lead to this thread on the mu-43.com forums where the original poster says:

I like UW lenses, and the images I can produce with them. Unfortunately, for those of us who want a non-fisheye lens, we really have one choice – the Panasonic 7-14mm f/4.0 zoom. As has been documented all over the net, this lens produces a nasty purple flare when used in combination with the E-M5 body.

Other posters in the thread contributed some of their own great examples that matched my experiences:

It’s unclear why this lens is such a bad combo with the OM-D — it’s either lens flare, internal reflection, a bug in how the OM-D works with this particular lens, etc… At this point it doesn’t matter  since I shouldn’t have to put up with this on a $900 lens.  The purple flare and spots are so bad in some of my shots that I’m not able correct it in post-process without a significant commitment in time. In some cases, I couldn’t correct it without massive surgery to the files, which almost erased the  joy I experienced originally taking the photo!

The Olympus OM-D E-M5 comes with an absurdly long power cord for the charger making it a hassle to not only deal with at home, but a pain in the button travel with.  Thankfully there’s an easy solution to get something much more compact:

Just in case you need a bit of space between the wall and your charger:

Alternatively, if you have a mac power adapter, you can use re-use the plug or just order an additional one:

Here’s a European plug to use when you travel and don’t want to deal with an extra plug converter:

Based on the reviews I’m reading, it looks like I might need to find a way to get the Olympus 75 f1/.8, in my camera bag…

From SLRGear (emphasis is mine):

The Olympus 75mm ƒ/1.8 is one of the sharpest lenses we’ve ever tested. It is tack-sharp even wide open at ƒ/1.8, gets a little sharper through to ƒ/8, and stays sharp even stopped down to ƒ/16.

There’s a lot to like about the Olympus 75mm ƒ/1.8 M.Zuiko; simply amazing results for sharpness, great resistance to chromatic aberration, very low corner shading and near-zero distortion. Add in excellent build quality and good looks, and you have a package that’s sure to please any photographer.

From Photoreview (emphasis is mine):

The M. Zuiko Digital ED 75mm f/1.8 lens has produced the best set of test results of any lens we have tested in the last decade. Couple that with superior build quality, compact size and ease of use with the E-M5 (and other) camera bodies and it’s difficult not to be impressed.

Three months ago, my Nikon D7000 had a tragic accident which involved falling off the my tripod and sheering my Nikon 17-55 f/2.8 off on in the process. Nikon was able to fix the lens for a couple of hundred bucks, but unfortunately the camera was deemed unrepairable.  So I was off to get a replacement camera.

Before pulling the trigger on another D7000, I did some research to get an idea of what new cameras had been released in the last year and a half.   During the course of my research, I was at first smitten with the idea of switching back to Canon after my 10 year hiatus.  The Canon 5D MkIII is a beauty, and despite not having the same dynamic range as the Nikon D800, it wasn’t crippled by an absurdly high resolution (and crazy file sizes) and funky custom preset behavior.  I’ve also always loved the controls on a Canon over Nikon.

Over the past several years, I’ve been traveling much more and lugging around my SLR + array of lenses got to be a real hassle.  It wasn’t necessarily the weight (which was annoying at times), but it also limited my flexibility in traveling. I always had to plan whether I was taking my gear for the day, or needing to return to drop it off in the middle of the day.  I always yearned for a smaller setup, but just never found anything that was going to be comparable to my SLR setup.

END_OF_DOCUMENT_TOKEN_TO_BE_REPLACED

Over the past year, I’ve fallen in love with photos out of toy / Lo-Fi cameras so I was absolutely thrilled when I got a Zumi Digital camera 2.0 as gift this past Christams.  I have been shooting like a fiend with it for the past week.  Here are some sample shots: 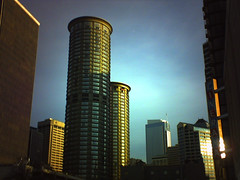 One of the hidden surprises of this camera was that there is an undocumented black & white mode!  I stumbled across it by accident going through the menus one day, and the great part is that it also works for videos!

Here is a shot I took of downtown Seattle: 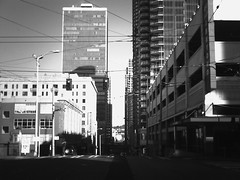 Here’s how you turn the B&W mode on:

Tada! You’ll now see video mode in B&W, and if you press the “OK” button one more time, you’ll go back to photo mode which will now also be B&W.

You automatically go back to color mode when you turn the camera off and back on, which means that you unfortunately can’t stay in B&W mode by default.

Note: I have the Zumi 2.0 camera, so this may not work for the first generation that was originally sold by Photojojo.