I spent 2 full days this week in a shoot sponsored by Cirque du Soleil helping to promote their new show that in town called Corteo.  They hired 4 photographers and 40 performers to roam various parts of Seattle handing out flyers and CDs to promote the show and my job was to photograph them in action.  The performers were a mixed crew with a wide-range of talents that are oh-so-different from my usual walk of life.  Let’s be honest, when you’re in the software business, you don’t often encounter people that do sword-fighting, acro-balance, clowning and interpretive dance for a living.  So needless to say, the scenes I got to capture were absolutely stunning and to say I was nervous was a bit of an understatement. How do you get hired to shoot something like this and not be nervous?!

I ended up capture about 1200 images in total and loved every minute of it despite it being 12+ hours each day of activities.   I learned some ultra-valuable lessons along the way: 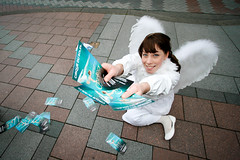 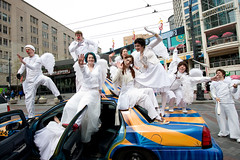 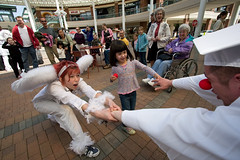 You can see the other 28 shots that I’ve gone through so far on Flickr.